The book sketches the interaction between music mediation, cultural policies, urban popular music and identityconstruction i 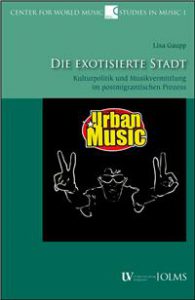 n today’s complex societies. Likewise, this study reveals how a global transcultural youth culture is emerging and developing under the influence of institutional structures in urban settings. The debates on migration, which have continued to flare up in Germany since the early 1990s, and which are dominated by defensive attitudes regarding what is «one’s own» and other segregating tendencies, show the need for counteracting these tendencies by uncovering the underlying «imagined intercultural identities». The analysis of the «othering» in discourses of multi- or interculturalism within the «dispositive of interculture» and its educational and political objectives demonstrates how one tries to present the «exotic other» as homogenous.
The ethnographic field study analyses how intercultural policies construct and label their target group through ascriptions of otherness, and, in doing so, uncovers which concepts of culture are applied by those responsible for intercultural projects and policies. Furthermore, it displays whether the attributed meanings and identities prove to be right at all.
The results of this analysis demonstrate how a «transcultural» perspective can reveal an alternative point of view in cultural policies. This leads to the conclusion that cultural politics should and need to adapt to the realities of today’s post-migrant social processes. A transcultural post-migrant perspective in cultural politics centers on interactions, crossroads and (contradictory) commonalities, without emphasizing segregating tendencies. Likewise, these features are regarded as advantages within globalized settings and can lead to policies that underline the promotion of post-migrancy as a part of normal life.
Available for Open Access Download here.