Our starting-point to think about Urban Music Studies was a conference titled ‘MUSIC CITY – HAMBURG?!’ hosted in 2010. Out of discussions held there, we edited the volume ‘Music City – musical approaches to the Creative City’ containing contributions of Adam Krims, Andy Bennett, Martin Cloonan, Richard Lloyd and Bastian Lange among others in 2014. The contributions in the book strike our experiences as multi-disciplinary talking about connections of music and the city:

Culture and especially the prod

uction and consumption of music are a pivotal part of branding urban settings as ‘creative’. In recent years, politicians with an unchallenged growth ideology and a bias for neoliberal restructuring of urban social and economic conditions, and their right hands in municipal planning and culture departments, discovered ‘urban music’ in its many aspects as a way to ‘sell’ their ideas of urbanism and urban development. In the book, we evaluate this development by discussing three significant levels: First, what are the important theoretical/ historical approaches to connect culture and music to urban spaces? Second, in which way these strategies can be examined regarding different international urban spaces? And third, by regarding the case of Hamburg out of different perspectives?

The increasing instrumentalization of music as a marketing instrument and the staging of urban conglomerates as “music cities” mostly serve the purpose of a neo-liberal “branding” of cities. The complex interrelationships between music and city have not yet been studied comprehensively. This transdisciplinary collection, with contributions by internationally renowned authors, links the theoretical foundations of the field with empirical results, selected case studies and historical treatises. The book does not only want to expand the common discourse on “creative cities”, it also provides important impulses for the cultural policy debate.

It contains fourteen articles exploring the interface of music organization and music city. It is our observation as editors that especially musicology has so far neglected the many links between music and the city. In this discipline there is evidently little interest in the socio-spatial effects of urban music on urban spaces or in the impact of urban change on music. The reciprocal relationships between the city and music are an academic terra incognita, even though in the broader field of cultural studies there has long been such a ‘spatial turn’. We hope this book will – together with others – help to fill this gap; and in order to do so two important notions must be more closely examined, namely, ‘music cit 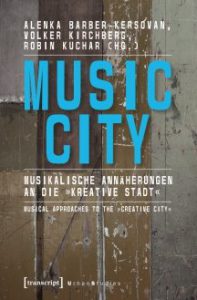 y’ and ‘creative city’. On the one hand, urban music is a project with economic legitimation that is governed and sponsored ‘top-down’. But on the other, urban music is a ‘bottom-up’ product of disparate urban groups using music to creatively express not only their diversity but also their tensions. This innovative potential has recently been discovered by ‘creative city’ strategists, but this power elite understands creativity as a purely instrumental and outcome-oriented product of economic development.

Many of the articles in this volume critique such a limited conceptualisation in at least one of three ways: first, by reflecting on the globalization of music and its effects on the local; second, by recognizing the obsolete but ever present distinction between popular and classical music, and third by looking at the potential of music to create sustainable urban cultures.